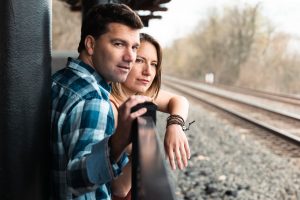 At some point during their online message exchange, lifelong musicians Eli Lev and Megan Leigh came to realize their wildly varied backgrounds made them perfect bandmates.

“There are a lot of paradoxes in our differences, but the music brings our voices and our lives together,” Eli says. Meg adds: “I’ve been singing all my life, but this is a whole new journey.” Today, the couple creates invigorating, experimental folk-pop through their duo project Wild Whispers; their debut album is due out Summer 2022.

The pair met on Instagram in 2017 when Meg was poking around online in search of local artists and reached out to Eli. “It was a slow process. We went to shows together for 6 months, and during that time, Eli didn’t even know I could sing,” Meg recalls, laughing. Eli continues, “Eventually I saw some videos on her profile and thought, ‘Woah, she’s a great singer!’ so, I drove an hour and a half to her family’s farm to hear her sing in person.” Since then, they have come together to create songs that feature empyrean vocal harmonies with a folk-pop feel, centered around ear-worm melodies, acoustic guitar, and adventurous sounds and textures.

Eli is an award-winning folk musician who grew up in a diverse suburb of Maryland. He loves Native American flute music as much as he loves electronic beats, and he basically learned to play guitar in high school and college rock bands. Megan is a rising solo artist who grew up in the country on a dairy farm, and fine-tuned her pristine lead vocals and harmonies through singing in church and choirs. She enjoys music ranging from theater to a cappella to emo rock.

When Megan joined Eli for his 2019 Anywhere We Can Go Tour, her ear for harmony and natural aptitude with percussion enriched his sets and solidified their on-stage chemistry. At a stop-off in Nashville, the pair was recruited to visit Majestic Ape Studio, where they instantly connected with producer Ben Reno (Loretta Lynn, Lady Antebellum, Blake Shelton) and decided to record their first three songs there. The ‘Wild Whispers’ moniker came from a misinterpreted beer can label while the couple was unwinding at a Nashville bar during a break in their recording session. 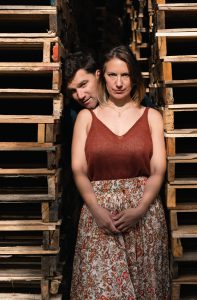 The duo resides on Meg’s family’s farm, a four-generation Civil War era compound nestled in Western Maryland. The large but cozy homestead encompasses a late 1700s two-story stone farmhouse which served as an officer’s hospital during the Civil War battle of Antietam. One of the mainstays of the property is a horse barn that has been partly converted into an event space for weddings, concerts and other special occasions. This is the wooden structure that can be seen in many of Wild Whispers’ performance videos on YouTube, and the pair frequently hosts live shows inside the barn and across the adjoining meadow. Farm life is a huge source of inspiration for Wild Whispers’ music and is intricately woven into the fabric of Eli and Meg’s lives.

Building on their various solo ventures and a breakout Tiny Desk Contest video submission filmed in the barn, the pair quickly gained traction. Since forming just three years ago, Wild Whispers has had its song “Another Side” placed as the theme for Not Invisible Native American podcast, earned a feature on Baltimore’s Hit Parade WTMD 89.7 by Sam Sessa as rising area talent, and was chosen to perform at the 2022 National Cherry Blossom Festival. Wild Whispers has also attracted a highly engaged fanbase they call the Whisper Fam, which includes music lovers from all around the world and from all walks of life.

Wild Whispers’ cinematic, full-length debut album spins through three song cycles. The first trilogy explores Greek mythology through an imaginative Americana perspective: banjo, strummed acoustic guitars, breathtaking harmonies, male and female lead vocals, and ultra-catchy vocals are boldly enriched by ethereal electronic textures and infectious beats. These songs include “Icarus Rising” which challenges the notion of Icarus’s ill-fated flight, the flowing and darkly-alluring “Another Side,” as well as the unflinchingly positive folk-pop tune, “I Am I.”

The second installment of songs concerns itself with more earthly matters, exploring Wild Whispers’ deep connection to the natural world. This follow up trio of songs boasts unison vocals and infectious rhythms. “Fire” explores the playfulness of an ephemeral tropical love-affair through a soundscape built on island-y steel drums and raw audio of Atlantic ocean waves that came straight from Meg’s iPhone. “My Mind” is social commentary about the stress of political divisiveness in today’s media, and “Hey” is a spiritual journey in meditation. 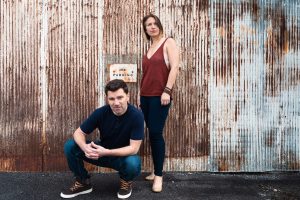 The album concludes with a third trilogy which was written through the lens of travel. These pieces brim with timeless Americana melodies, sleek electro beats and ambient textures, along with Meg and Eli’s soulfully melodic vocals. The collection includes the tour-inspired adventure folk tune “Trace the Lines,” a song about the cycle of life “Rivers to Rain,” and the socially-conscious modern national anthem “Purple Mountains.”

Wild Whispers represents cross breezes of two very different lives and perspectives coming together to form a refreshing new sound. “Eli has really challenged me creatively to grow as a songwriter,” Meg reveals, and Eli explains, “I wouldn’t have been able to write any of this music without Meg.” The duo adds… “And we’re just getting started.”